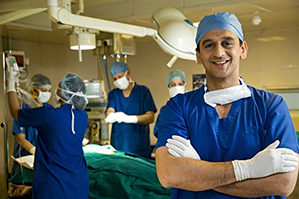 We offer a complete range of investigations, medical procedures and surgeries at our hospitals. The treatment procedures listed below is a partial list only. To enquire about treatment for your condition, please click the link at the bottom of this page.

Appendicitis is the inflammation and infection of the appendix, a small, finger-shaped pouch that is located at the junction of the large and small intestines.

Appendectomy is the surgical procedure for removal of the appendix,. Surgery, normally complication free, is the standard treatment for appendicitis and patients usually recover from appendectomy without experiencing complications.

The gallbladder is a small pear-shaped sac that is located beneath the liver in the upper right side of the abdomen.

Cholecystectomy is the surgical removal of the gallbladder when there are disorders such as gallstones (small, solid accumulations composed of cholesterol and bile salts). The gallbladder is not an essential organ although its function is important.

Gastrectomy is indicated for the treatment of bleeding gastric ulcer, stomach cancer and noncancerous polyps. This procedure involves the surgical removal of all or part of the stomach.

A hernia is caused by a weakening of the inner layers of the abdominal muscle. The lining of the abdomen projects out in the form of a small sac, which is sometimes penetrated by abdominal tissue and part of the intestine.

Hernias may occur in the groin, the navel, at the incision site of a previous surgery or when the lower part of the esophagus and a portion of the stomach slide up through the esophageal hiatus.

Hernias are repaired by open surgery or by laparoscopic surgery. In either case, the hernia sac is opened and the intestine or other tissue are released into the abdomen. The abdominal muscle tissue is pulled back together using a synthetic mesh or a suture. The result is a reinforcement of the weakened area.

The spleen is an important organ in fighting infection. It is found in the upper left-hand side of the abdomen, partly protected by the ribcage.

Complete splenectomy takes place when the entire spleen is removed. In partial splenectomy the surgeon removes only part of the spleen. This may be a useful compromise that reduces pain caused by an enlarged spleen while leaving intact some portion of the spleen function.

In Laparoscopic splenectomy the spleen is removed using a minimally invasive technique that involves the use of surgical instruments, with the assistance of a tiny camera and video monitor

It is sometimes necessary for the surgeon to remove one or more of the parathyroid glands also while removing the thyroid gland.

The surgeon may decide on the extent of surgery (total or partial) in the course of surgery itself after examination of tissue samples removed during the surgery.

Get a Free Estimate